Home About the Artist 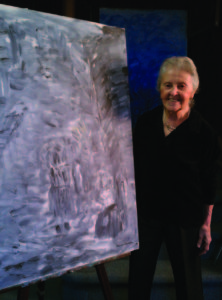 Margaret Ricciardi, was born in Brooklyn, New York on March 8, 1914, to Giuseppe Della Badia and Filomena Maffucci, both immigrants from Calitri, (Prov. Avellino), Italy.  In 1937 Margaret married Frank Ricciardi, also from Calitri. Together with her husband, Margaret established a shoe service business that became a landmark to thousands of daily commuters in the Staten Island Ferry terminal. When the business expanded, Margaret’s artistic flair was manifested in her boutique section, which showcased designer shoes, handbags and accessories.

Determined to obtain a college degree, in 1981 Margaret enrolled in classes at the College of Staten Island, City University of New York. After Frank passed away in 1983, Margaret registered full-time in the arts program and in 1986 received her Bachelor’s degree in Studio Art. Afterward, she continued her study of art under talented artists and professors at CSI, and the Lorenzo de Medici Art Institute in Florence, Italy.

Margaret was honored in 2006 with the Award for Cultural and Artistic Accomplishments, at the third annual Festi dei Campani nel Mondo, by La Federazione dell Associazioni della Campania, USA. Her painting, Twin Towers, was accepted for exhibition by the Museo dell’ Emigrante in Naples.  Over the years, Margaret has had a number of solo exhibits, including at the Snug Harbor Cultural Arts Center and CUNY’s College of Staten Island.

In recognition of her Italian heritage, and in memory of her husband Frank, Margaret established the Margaret and Frank Ricciardi Scholarship, enabling Italian majors at the College of Staten Island the same opportunity of study abroad that she received. Additionally, since 2011, Margaret has provided an annual award to a graduating studio art major.

In honor of Margaret’s 100th birthday, the Gregg Gallery at the National Arts Club hosted a retrospective exhibition of her painting and sculpture.